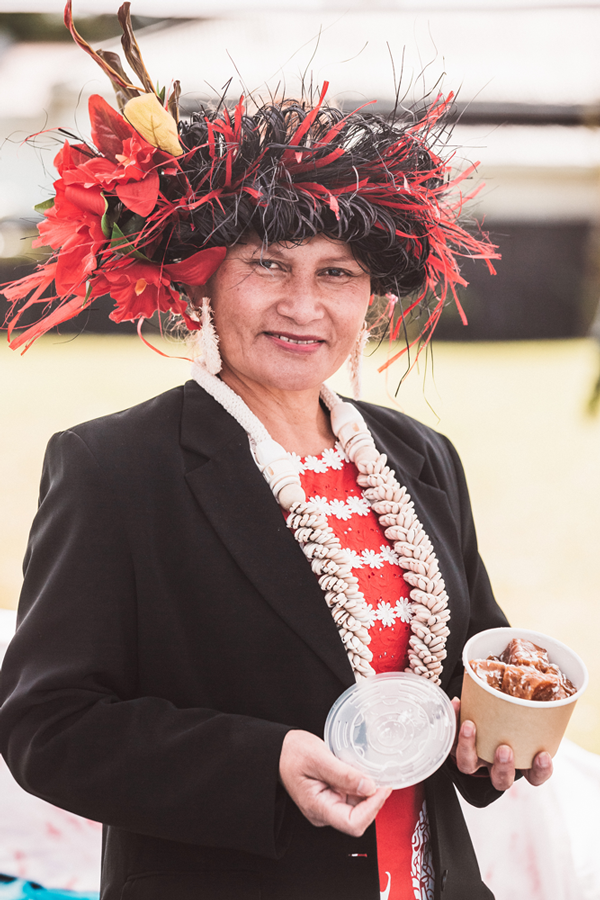 If you’re chatting to the lovely Ina Joseph Aria at her stand at the Friday food market in Mangere, it’s easy to see how nostalgic the dishes she’s selling are for local Cook Island customers.

People’s eyes light up when they see the banana and pumpkin poke. They buy not just one, but three or four to share with the family. It’s clearly delicious.

Maybe it’s because poke isn’t something you make every day. It’s not a whip-it-up in 10 minutes process – especially if you use pumpkin, which is harder to peel and dice than banana.

“I remember making it with Mum when we were younger,” says Ina. “There were eight of us girls and if there was a special occasion like a big dinner or a wedding, we would all help make the poke. Us Cook Islanders just love it and I guess it really reminds us of home, even when we live far away.”

Poke is basically over-ripe fruit, or pumpkin, mixed with tapioca flour, baked in the oven, then served with coconut cream. It’s comfort food at its very best. Traditionally it was baked in an underground oven. With fruit it’s like a thick creamy pudding but can also be a side dish for a main meal such as goat or pork, especially when made with pumpkin.

Even though Ina, a Mangere local, has been in New Zealand since 1979, she holds strong to the culture she grew up with in the islands. She even designs her own clothes, based on Cook Island patterns.

Ina has made a new life here, but that hasn’t meant leaving her culture and traditions behind – and judging by how quickly her poke sells out at the market, she’s bringing that sense of home to lots of other Mangere locals too.