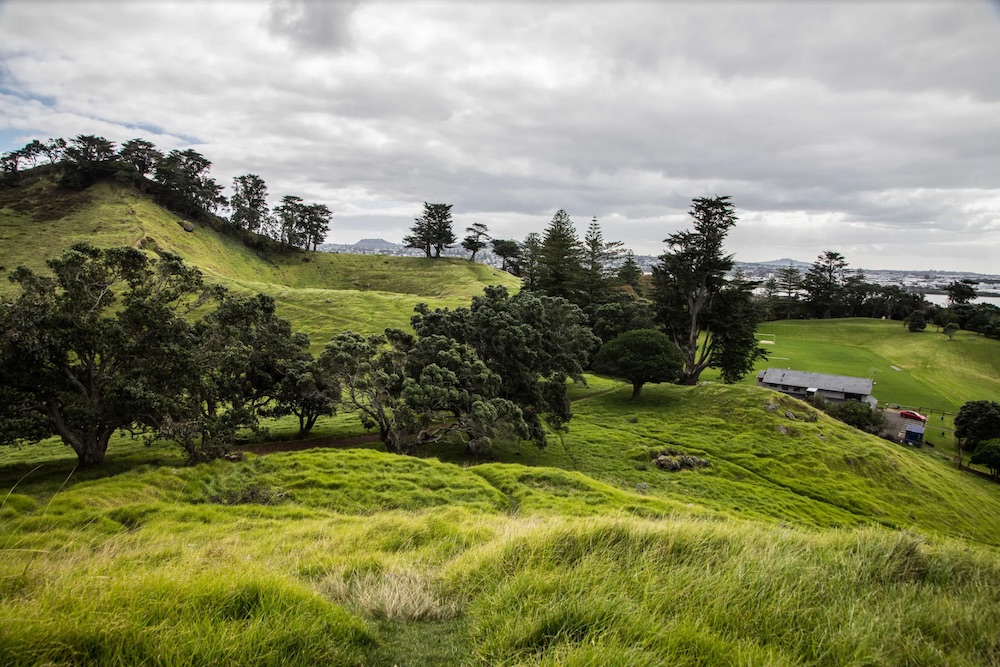 They watch over us as we go about our lives in Tāmaki Makaurau. Wherever we are in the region, we’re near at least one – sometimes, driving across the city, we might pass as many as four or five.

We’re talking about our city’s maunga, and Mangere has one of the best. It’s Te Pane o Mataaoho, or Mangere Mountain.

In Te Ao Māori, Mataaoho was the atua of volcanoes and earthquakes in this area, and te pane means ‘the head’.

In fact, the Northern Manukau volcanic field of Auckland is collectively known as ‘Ngā Tapuwae o Mataaoho’ – the sacred footprints of Mataaoho.

Te Pane o Mataaoho is one of the best- preserved Māori pā sites in New Zealand. Many signs of ancient life can be seen – rock walls and gardens, trenches and terraces, middens and earth ovens, and nearly 80 rua.

The maunga was part of a busy network of pā on extinct volcanoes across Tāmaki Makaurau – the biggest network in Polynesia. But only Te Pane o Mataaoho has what geologists call a ‘tholoid’. This cooled lava dome in the middle of the huge volcanic crater has obvious mauri. It’s awe-inspiring to walk over the rim of the ancient volcano and see it.

The way we lived

For Māori living around 700 years ago, Te Pane o Mataaoho was a gift – rich volcanic soil, forests full of birds, and both the Manukau and Waitematā harbours were stuffed with kai moana. The tangata whenua wanted for nothing and the maunga was home to several thousand people.

The maunga was where the tōhunga would perform ceremonial tattooing and consult on matters both medical and spiritual. Although a walking track now crosses over the tholoid, blood was shed here from tā moko, so it is a very tapu place.

Daily life on Te Pane o Mataaoho varied with the season. In spring and summer, gardening, hunting and storing was a priority. In autumn and winter there was more time for friends and whānau – food had been harvested and stored and the people could be more social, singing waiata, practising haka, poi and taonga pūoro or playing sports and games.

In the 1820s, Pākehā arrived. There were problems over ownership of the land. The Kingitanga movement began, with strong local input; some Iwi reasoned that uniting tribes under a Māori king would give them more power in dealing with colonists.

But Governor Grey decided the Kingitanga movement was a challenge to the Queen’s sovereignty. On July 9, 1863 he issued a decree: all Māori living in the area between Auckland and Waikato must swear allegiance to the Crown, or be evicted. Faced with this decision, nearly all of the tangata whenua were forced to flee. Most of the area was taken over by colonists and those returning in later years saw major changes to their homeland.

The tūpuna maunga of Tāmaki Makaurau are entering a new era.

In 2014, as part of a historic Treaty of Waitangi settlement, 14 maunga were returned to the 13 Iwi and hapū of Auckland. Since then the maunga have been under the protection of the new Tūpuna Maunga Authority (TMA).

Te Pane o Mataaoho is still owned by the Crown, but the TMA is now managing it, along with the rest of Auckland’s maunga.

In 2016, the TMA adopted a plan to restore, enhance and protect them forever. These include managing pests and returning native animals. Vehicle access to the sacred tihi has already been restricted on most maunga, and eventually there’ll be new trails, boardwalks and informative signage.

“The maunga are not simply parks, but are some of our oldest and most important cultural and archaeological landmarks,” says Paul Majurey, chair of the Tūpuna Maunga Authority. “And with this learning and understanding comes support for efforts to protect and restore them.”

On Mangere Mountain, around 150 exotic trees are being replaced by 13,000 natives. Over 600 native shrubs will also be planted to make a habitat for native ornate and copper skinks.

The tihi loop track will be widened, with steps added and rest areas to take in the views. There’s a special new playground to come too.

Te Pane o Mataaoho and the other maunga of Tāmaki Makaurau are part of our human history – births and deaths happened here, love and laughter, battles and storytelling. Aucklanders are beginning to understand that the maunga have enormous mana and mauri. We’re lucky to live among them.