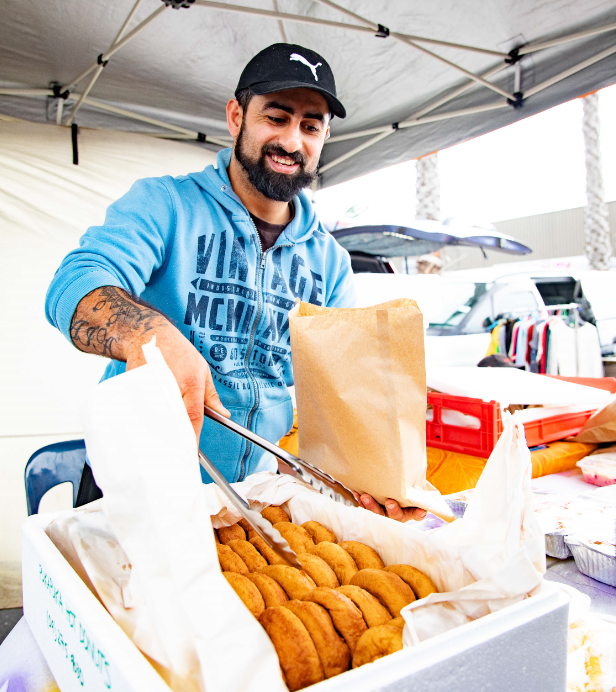 One of the most popular stalls at Mangere Market is Pukapuka Donuts; they’ve been part of the market scene since 1998, always ready with a smile for their regulars who come every week for their fix of this Cook Island favourite. The Pukapuka Trust – who run this long time Mangere market stall – was first formed in 1951 to unite the Pukapukan community in New Zealand.

Pukapuka Island is a tiny atoll that is part of the Cook Islands group but located well, well north of Rarotonga. Due to its proximity to other nations like Samoa and Tokelau, it’s highly influenced by Western Polynesia and has its own language and slightly different style of food.

The New Zealand chapter of this community began after World War II when a soldier from the island married a New Zealander and settled here, soon bringing his immediate family over – followed by others over time. The community grew, and now there are almost 10 times as many Pukapukans here than back home.

The trust was set up mainly to retain this group’s unique culture in the land they had now decided to call home. And they’ve been very successful, holding community nights twice a week since the 1950s so people can connect. “In 1995 we decided we’d like to be recognised as a legal entity so became registered as an official migrant group, the Pukapuka Community of New Zealand,” says Nuku Rapana, group leader. “It was a sign we’d made our home here and weren’t going back to the Island.” In 1997 they took it one step further and established their own community centre in an old factory; this came with a large mortgage so they started fundraising the only way they knew how, by cooking their food to sell to members of the community and others. And they have made donuts every day since, much to the delight of Mangere marketgoers.

“They have always been available daily from our centre if people wanted to buy them, but in 1998 we started selling them at the markets too, and we’ve never stopped. We also sell our own style of bread plus a couple of other dishes. They just fly out of our stall every weekend. People love a taste of home and we love being able to raise money for our community to keep our culture alive.”