The Little Creek that Could 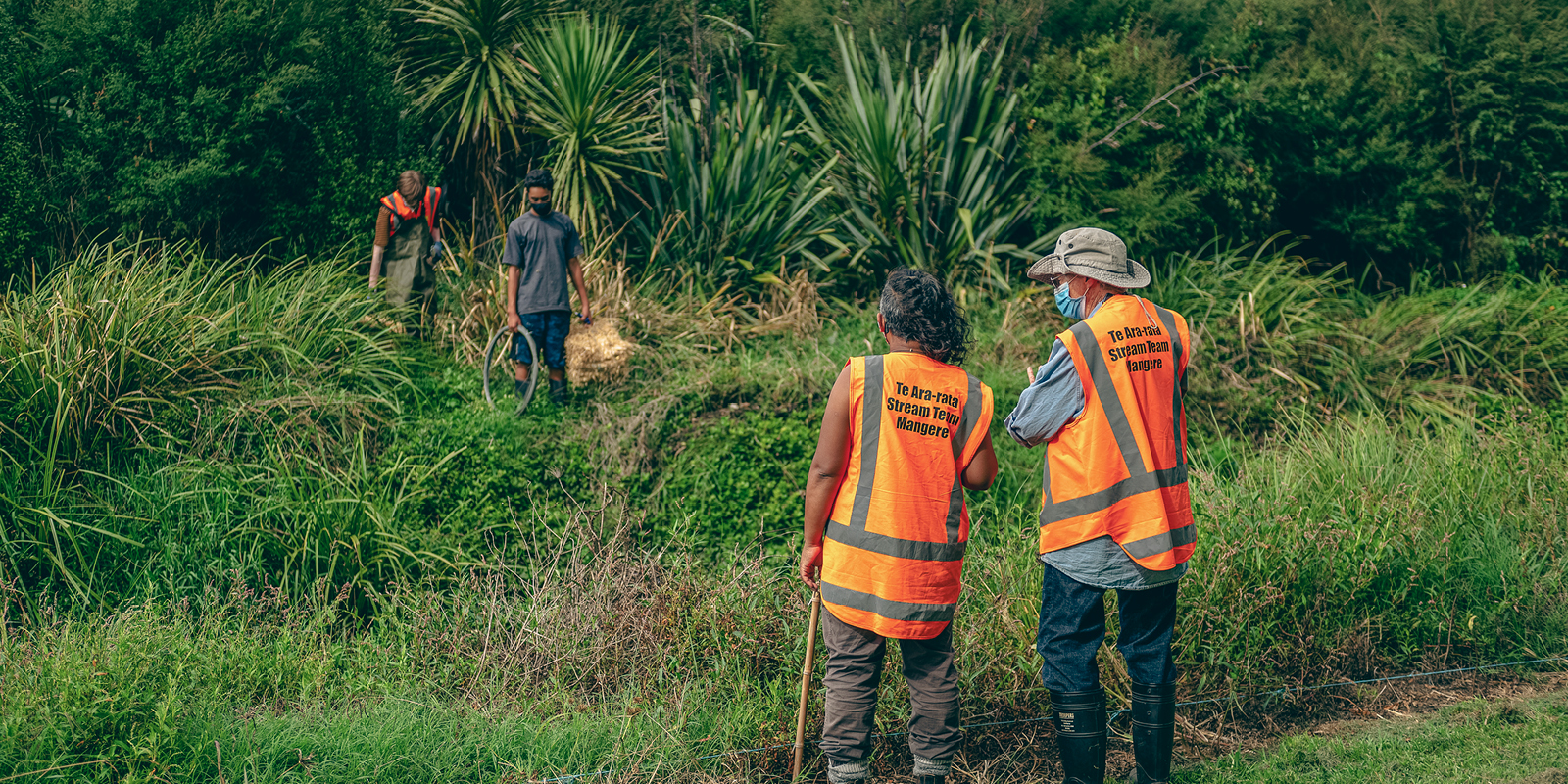 Coming together to restore the stream.

For an unassuming little creek in the middle of suburbia, Te Ara-rata Creek has had more than its fair share of attention recently. Changing from a sad, rubbish-filled drain over recent years into a much cleaner stream edged with native plantings was one thing, but after an endangered native fish as well as inanga (whitebait) were found in it, the stream hit the headlines as an example of what can be achieved when a community decides to make a difference.

The beginning of the Stream Team

Back in 2004, when Julia Tu’ineau graduated with a Master’s degree in Environmental Science from Griffiths University in Australia, she decided to put it to good use locally. Te Ara-rata Creek was the ideal project; it was in her own community, and at that time there was a problem to be solved – some properties along the stream were flooding. “I convinced the residents that if we planted the banks, the flooding would reduce – and it did.” Funding from community grants for more plants followed, other people came on board, and eventually the Stream Team was born.

They began planting the eroded banks with native sedges and progressed to harakeke (flax) and manuka as the banks stabilised. In 2017/18, Wai Care provided enough plants for a solid chunk of bush and over winter this year pūriri, kahikatea, rewarewa and taraire have been planted – canopy trees which will bring more birds to the area. Already, species of ducks, shags and herons are often seen. Tuna (eels) are now common and inanga (whitebait) lay eggs among the sedges every autumn.

In 2019 the fish that made headlines was discovered – an endangered giant kōkopu (native trout) – unexpected proof that the creek had been able to sustain this secretive fish. Environmentalists were amazed, and the team was fired with new enthusiasm.

Pragna Patel volunteers with the Stream Team and says she’s learned an enormous amount from Julia. With a teaching background herself, she now contracts to the Local Board to help schools fulfil their native ecology curriculum through her ‘Curious Minds’ education programme. Streams provide opportunities to study various subjects, so the Te Ara-rata Creek regeneration has proven valuable.

Pragna is passionate about the programme. “Students from years 10-13 cover biology through plant identification, macro invertebrate metamorphosis and life cycles, fish migrations, food webs and cycles of energy. We plant shrubs and trees, measure their growth, take water samples and trap pests. Maths and engineering are covered too, with changes in water quality and growth of bush diversity logged using digital systems.”

There are increasingly well-known health benefits from spending time in green spaces too. ‘Shinrin-yoku’ is a Japanese concept which translates to ‘forest bathing’ and it has been proven to counter depression and anxiety, boost immunity, aid sleep and lower blood pressure – to the point where doctors are now prescribing it in the UK. It’s about being quietly present amongst trees and nature and as a concept it’s interesting to Kāinga Ora in its developments across Tāmaki Makaurau.

“Kāinga Ora has been very open to conversations around the future of our work,” Pragna acknowledges. “With so much new building happening near the banks of the creek, we’re concerned for the mauri (life force) of the stream, but we’ve been able to have some input into stormwater design which may alleviate pressure on it in the future.”

For James Fisher, Development Manager for Mangere West, the Te Ara-rata Creek regeneration represents an opportunity. “We’re always aware of the need for people to enjoy green spaces in our developments, so we discussed different ways of working with Council, mana whenua and the Stream Team to enhance the environment further – stormwater outlets were one example. Instead of using traditional solid concrete outfalls, we’ve constructed rock beds planted with native wetland species. This stops erosion of banks in heavy rain events and also creates more natural places for fish to spawn. We’ve also anchored obstacles in the stream such as rocks and logs which slows the water flow and creates safe habitats where fish can hide and breed.”

Along with educational opportunities, there are some big cultural concepts here that Pragna says are important to instil in young people. (education and wisdom); kaitiakitanga (stewardship of our land and water); and whanaungatanga (connection through shared experience and work) can all be experienced here. To gain an understanding of restoring and preserving our environment, our rangatahi need to realise how very unique the New Zealand environment is, and Te Ara-rata Creek is a wonderful place to do that.”

A new era for the stream

The creek has now officially reverted to its historical name, Te Ara-rata, thanks to a partnership between 19 iwi and 15 Auckland Council Local Boards. Te Kete Rukuruku is a cultural identity programme which is all about collecting and telling the unique Māori kōrero (stories) of Tāmaki Makaurau (Auckland). The naming component of the programme will restore Māori names in many of our parks and community facilities, along with the stories of how they came to have them.

The project aims to showcase history of the area and support ‘te reo te kitea, te rongohia, te kōrerohia and te ākona’ (the Māori language) to be visible, heard, spoken and learned. In some places, bilingual signage will be put up with QR codes which people can scan to hear how the words are pronounced. The Mangere-Ōtāhuhu Local Board strongly supports this project, with 62 parks in the rohe (area) already provided with names.

Moyle Park, and what has for many decades been called Tararata Creek are two of the first places in Mangere to receive the new signage. Moyle Park’s Māori name is Te Ara Tāwhana, meaning ‘the curved pathway’. It was once part of an ancient track used to gain access to Te Ara-rata stream, which led out to the Manukau Harbour.

Te Ara-rata means ‘the preferred route’ because the harbour inlet was a favourite mooring point for waka and their crews who came for seasonal gathering of tuna (eels), inanga (whitebait) and water birds. The area south of Te Pane o Mata-oho (Mangere Mountain) was one of the largest wetlands in Tāmaki Makaurau and provided a rich source of food for the mana whenua who have called the area home for centuries. It’s fascinating to imagine the ancient scenes of waka (canoes) being paddled up the inlet and loaded up with kai (food) provided by busy hunter-gatherers.

The names for the park and the creek were provided by local iwi (tribe), Te Ākitai Waiohua. For them and other iwi across Tāmaki Makaurau, the Te Kete Rukuruku programme represents much more than the return of names to the area. It’s about the return of a unique sense of identity to a place that has seen much change, and it’s Te Ākitai’s hope that the community finds a sense of pride in their identity through new ownership of te reo (the Māori language) around Mangere.

Julia Tu’ineau and the Stream Team have plenty of ideas for the future of the stream and its associated activities. “We’d like to set up workshops in rongoā (Māori medicine), teach native plant seed collection and propagation, and build community gardens and art installations.” Māpura Studios are inspiring local students with kōrero about Te Ara-rata Creek and hope eventually to install resulting artworks along the walkway. “We also want to build a māra hūpara or traditional Māori playground, and we’d really love to create a platform for an outdoor classroom beside the stream,” says Julia.

Kāinga Ora is undertaking a flood study this year and depending on results, there may be options for more land to be made available near the stream. “Some old sites may not be feasible to build on due to existing flooding and these could potentially be utilised for localised widening of the esplanade or to make reserves that could be put to use – as community gardens, for example,” James Fisher explains. “The ‘I AM Māngere’ group has taken a one-year lease on a vacant, grassed Kāinga Ora site nearby, so if that has positive outcomes there’ll be more ideas to work with.”

The creek needs you!

Te Ara-rata is the source of ongoing connections, not just within the community but to the water and land. The Stream Team would love to welcome more members. If you’re keen to make a difference and meet new friends in Mangere, get in touch via their Facebook page: Te Ara-rata Stream Team

You can read more about what is happening in Mangere in the latest issue of Home Base here.

Mangere is chocka with humble people quietly helping others who need it. This issue’s Local Hero is …
Read more
All Mangere
Community

Vera Wipani (Ngati Kahu, Ngati Paoa) is originally from Taipa in the Far North, but as a young girl …
Read more
Closeclose