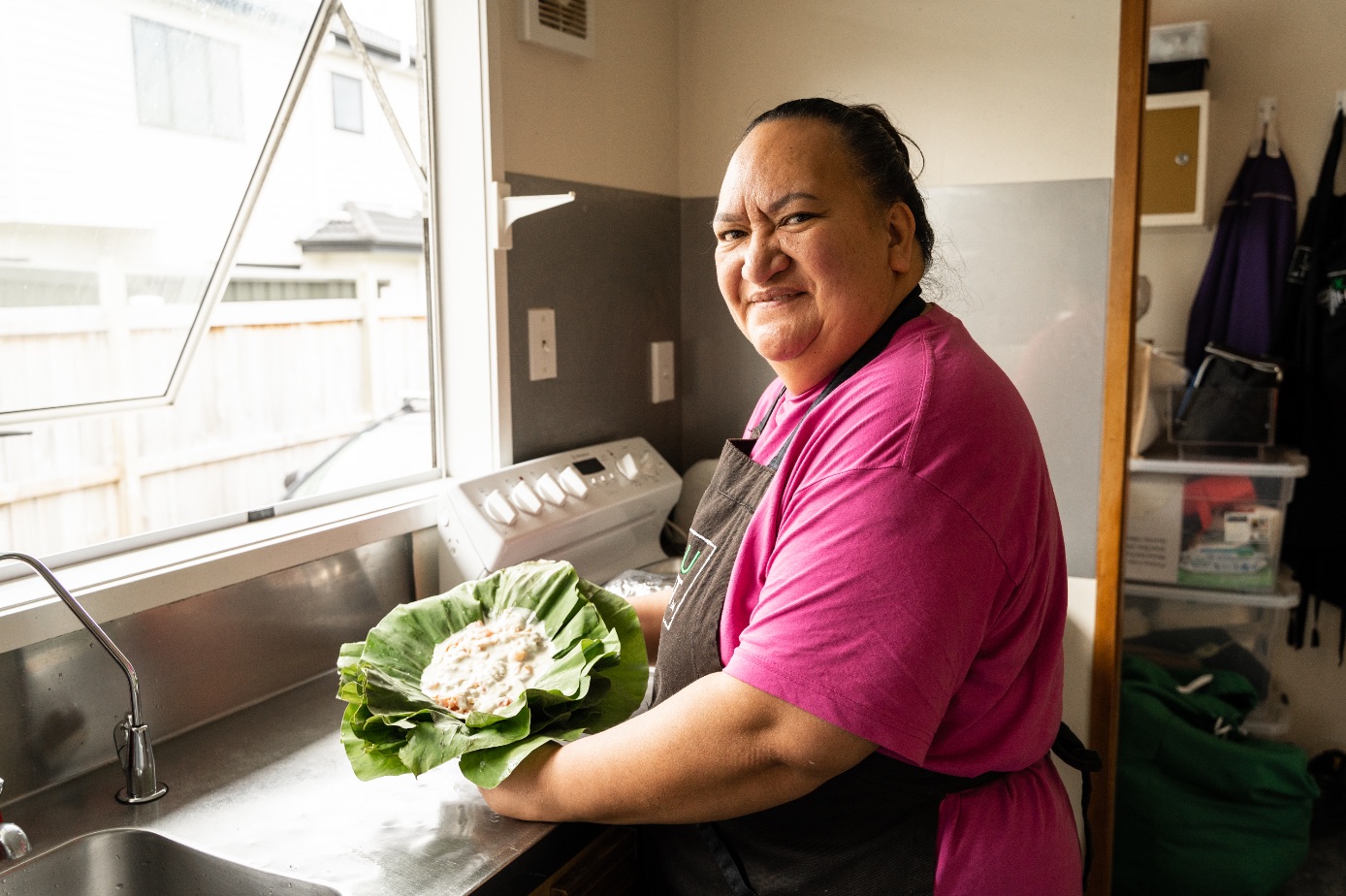 Ina Simpson came to New Zealand from the Cook Islands in 1974, when she was just a baby. For a Pacific Island family, the culture – and temperature – shock was immense; it’s safe to say there’s quite a marked difference between Rarotonga and Bluff.

The family still talk about the minus-one temperatures when they arrived. I can’t even imagine how much they had to adapt to their new country,” says Ina. But adapt they did, all the while retaining a strong sense of their Cook Island culture – especially when it came to food. Rather than converting to roasts, sausage casseroles and other 1970s Kiwi favourites every day, they set about finding their traditional ingredients and recreating meals from their homeland in Aotearoa.

One of the most important ingredients in this equation was rukau, taro leaves, which are used extensively in Cook Island cuisine. “Rukau has always been so special to me,” says Ina, who in 2017 set up her business Rukau Hut, making pies with rukau and meat filling.

Maybe it’s because her family made such huge endeavours to source rukau here, instead of finding a substitute, a symbol of their commitment to staying true to their island roots, even when far from home. “In the Cooks it grows everywhere, every day and you never run out of it, just south of Invercargill it’s a bit of a different story. We had to grow it in glasshouses or however we could, but I love that my parents made such a huge effort to retain our food from home — even when the conditions weren’t really on their side.”

Ina has fond memories of post-church picnics in Bluff. “Just like in the islands, groups of families would agree on a spot and after the service on Sunday we would get together and share food. There was always meat, our potato salad, Cook Island donuts and always something with rukau, when it was available. Cook Islanders never cook on a Sunday, so all the preparation was done by the ladies before sunrise or the day before. Us kids would run around and have fun and it was all about being together.”

This value of togetherness is something Ina still brings to everything she does to this day. While she’s very involved in her own community she’s also on a mission to share rukau, her ‘green gold’, with anyone who’s never tasted it. “I feel so strongly about sharing our beautiful food culture, so it spreads – and also so it lives on for generations to come with our own people. We may not be in Rarotonga any more, but our traditions keep our culture alive here, and in Mangere where there’s a big population of Cook Islanders it’s so nice to bring people a taste of home - with a modern twist.”

Ina has shared one of her favourite ways to cook rukau. This recipe serves one person but can be doubled, quadrupled or multiplied as many times as needed for the size of the crowd. Change the type of meat to your taste or make it vegetarian by replacing the amount of meat with the same amount of vegetables.

Do you have a favourite recipe you’d like to share? Pop into our info centre or email us at info@mangeredevelopment.co.nz

One of the most popular stalls at Mangere Market is Pukapuka Donuts; they’ve been part of the market...
Read more
All Mangere
Healthy homes